(Hinamatsuri just ended their manga run a while ago. Here’s a post of me talking about my favorite character, Anzu.)

I’m sure all of you who follow me know about my love for Anzu at this point. She started out as just an annoying side character/rival and quickly grew to be the focus of the best character arc in the anime!

Today, I’ll be talking about her and why she is such a captivating and empathetic character.

Anzu starts out as your typical rival character. She is there to bring back Hina by force, and her intro has her using her powers haphazardly to steal clothes from a delinquent biker gang. She mirrors Hina in every way, by being loud, energetic and having blonde hair to Hina being quiet, apathetic and having dark hair. Much like how shounen characters and their rivals tend to be, in fact. This is all intentional so that we immediately know who she is and what her base personality is from the design alone.

She loses to Hina, and to make a long story short, is now stuck in this world with no way of returning.

Right now, she is just a typical bratty rival character, and most of her lines are cliche or comedic. Her main trait that we see here, is her pride.

That is, until she becomes a- 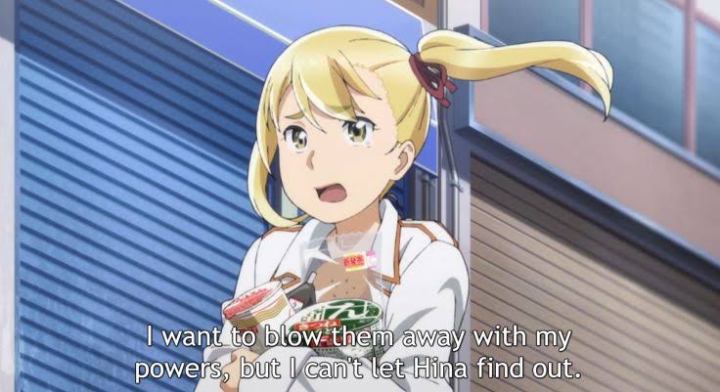 Anzu refuses to use her powers to help herself because she fears Hina knowing about her current condition and making fun of her for it (not yet aware Hina would probably not notice or care), and so resorts to petty thievery of food from various establishments in the neighborhood.

Eventually, she almost gets caught until a kind stranger helps her. The kind stranger is a homeless man named Yassan, and he asks her to promise to never steal food again, and tells her to take empty cans for recycling instead.

After a long arduous day full of hard work and walking, Anzu trades in the cans for a measly amount, and demands an explanation. This is when Anzu starts learning the value of hard and honest work from the sweat of your brow, a value she keeps with her from now on. It gives her pride something meaningful to actually be proud about.

Yassan then introduces her to his group of homeless people, and while at first they are prickly and mean, asking Anzu to sing for them as a form of payment for allowing her to live with them, her childish demeanor and awful singing remind them of their own estranged family, and welcomes her with open arms.

Now we see the effect that Anzu’s innocence has on people, and reminds us that underneath her brattiness is just a lonely and loveable child.

Anzu does her job of can collecting with a lot of energy and excitement, and is very eager to please her newfound homeless family. Nitta finds her collecting cans one day and recognizes her. Nitta then offers her a huge sum of money, and at first I thought she would just take it no questions asked, maybe for comedic timing or just because I didn’t yet appreciate her growth.

No, instead, Anzu refuses because it wasn’t a result of her hard work, and would be tantamount to theft to her because, as she learned, anything she gets without working for it is not worth having at all. She refused an easy way out. This spoke volumes about her growth, and the next moment builds on this, because when Nitta is about to leave, she is suddenly hit with the idea of using the money to buy her homeless friends some drinks, and so she runs after him and shyly apologizes before asking for the money. 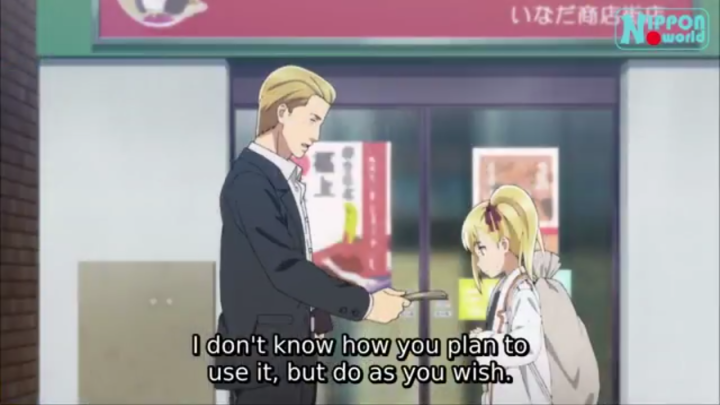 Her first thought, with all that money, was using it to make other people happy. It’s a simple desire, but the fact that she’s that young and what she wants is for others to be happy, shows us that she has a very caring side that never had a chance to be shown before when she was simply a weapon for the organization. The fact that she is acting guilty about it as well means it conflicts with her feelings of “taking charity”.

She still has that pride she had back then, but it is now more heartfelt and genuine instead of selfish and cocky. Plenty of people take pride in their work, and Anzu is no exception.

Of course, the shop owners spot her and take what she owes from them. This upsets her so much that she cries about it to Yassan, because she immediately feels like she disappointed them all because of things she did in the past now interfered with her good intentions in the present.

Yassan comforts her by saying at least now, she has no hangups from her past,and is now free to move forward as a homeless girl.

Now even more deeper mirrors are added between her and Hina. Whereas Hina is apathetic and lazy, was dropped in a place of wealth where she is fed and sheltered in lavish comfort, all the while barely showing any gratitude to her guardian, Anzu is honest and hard working, was adopted by a family of homeless people, and is always looking for a way to show her her gratitude to them despite their living conditions.

In this part, Anzu learns to be compassionate.

It was probably around this moment that I started calling Anzu-

However, things aren’t going so well for the homeless, as the government is planning to block off the park that they live in. Anzu finds out about this and makes signs to protest it, and she excitedly shows it to Yassan.

To her surprise, he starts looking even gloomier, and he gently tells her to not bother. Anzu is confused at this sudden bout of apathy from the man who taught her honesty and hard work, and is upset.

Later, at the farewell party, she asks all of them to find a home together, so they will never be apart. Heartfelt and optimistic, and in any other normal show, the homeless would all cheer and agree with her. However, Hinamatsuri impresses me by showing us the realism of homelessness.

They all stare gloomily at her, and one man even starts shouting, asking her if she’s making light of his failures, and tells her that they can barely feed themselves right now. Anzu is so taken aback by this negative reaction to her heartfelt statement that she starts bawling on the spot. Her crying in this scene is some great voice acting. The heaving, the hard blinking, and then shout of despair before sobbing is infectiously upsetting. It’s moments like this that remind me how naive Anzu is because of her age. She is still a child, and isn’t aware of the realities of life, even as a homeless girl. To her, life with the homeless was normal, even happy, and she’s content. No matter what the situation, she always looks at it in the best light.

Yassan leaves her in the care of an aged couple that owns a Chinese restaurant, and they gladly take her in. She gets offered a warm meal, warm bed, and a loving atmosphere after all that she’s been through, and how does she react?

She cries out of guilt. This is a result of her two main traits (pride and compassion) finally coming to a head. Her pride stops her from enjoying, in her eyes, a comfortable lifestyle that she didn’t work for, and her compassion makes her think about her friends being alone and hungry by themselves.

The next day, she immediately starts requesting to work for the couple, saying that she can at least do that much for their kindness. She is a wonderful worker and a quick learner, because of the solid values being homeless had taught her.

The old man still notices her being sad, and explains to her that Yassan and all the others live on in her, and she in them, through the lessons and memories they gave each other. This might be cliche, but the execution of the scene, the heart put into it as well as the great dialogue exchanges, is done perfectly. 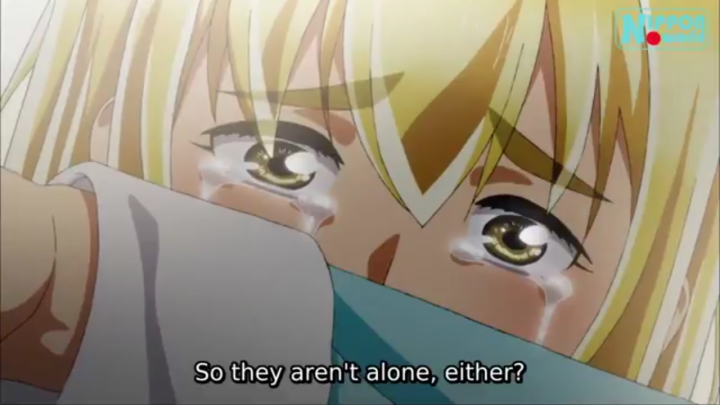 Anzu, for all intents and purposes, should be the most middle-of-the-road girl in the show.

She’s normally competent, but not Hitomi god-levels of good at any profession.

She has decent esper abilities, but not nearly as strong as Hina’s.

And while she WAS homeless, she wasn’t stuck on an island all alone like Mao. 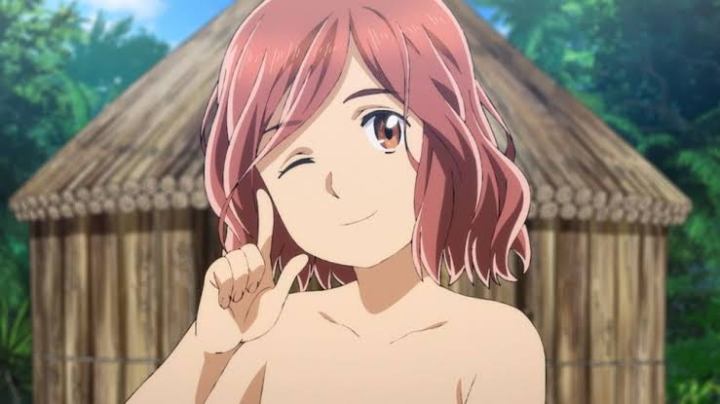 However, what defines her that the other characters lack is that her arc is carried hard by her development. The other three girls have storylines that rely on situational comedy and gags, and while they have their fair share of development, we actually see Anzu at every point of her development, and we see her grow the most as a character.

Another thing, that I didn’t notice until a few episodes after the homeless arc, is that Anzu’s abilities as an esper were never used again in a significant way since she stopped using it to avoid Hina’s power senses. I like to think that, even after she has long grown past being embarrassed of Hina’s judgement, she chose not to use her powers for her own gain after experiencing the hardship of physical labor. She would think it’s “cheating” to make her life easier with powers she didn’t really do anything to get when others have it so much harder.

I checked the cut manga chapters from the anime, and much the same is true. Heck, she even forgets she has powers at some points even at times when it would be more feasible.

So, in an anime with over-the-top Yakuza stories, ultimate success stories, and sci-fi mysteries, my favorite story ended up being that of an honest, kind, and hard working girl just trying to live a normal, happy life. That alone shows how great her character is, and why Anzu, is the best part of Hinamatsuri.

Thanks for reading, make sure to comment your opinions down below if you also liked Hinamatsuri!