Last month, Sweetness and Lightning released its final chapter, and I felt like a part of me just grew up and left for college (literally). To further along the melancholy of post-series depression, I wanted to talk about why I love this series. Sweetness and Lightning was partly responsible for me discovering two of the things I love today: manga and cooking. Manga, because the anime left me wanting more, and so I turned to actually reading source material for the first time, and cooking, because well come on, it’s practically a cookbook with a narrative! 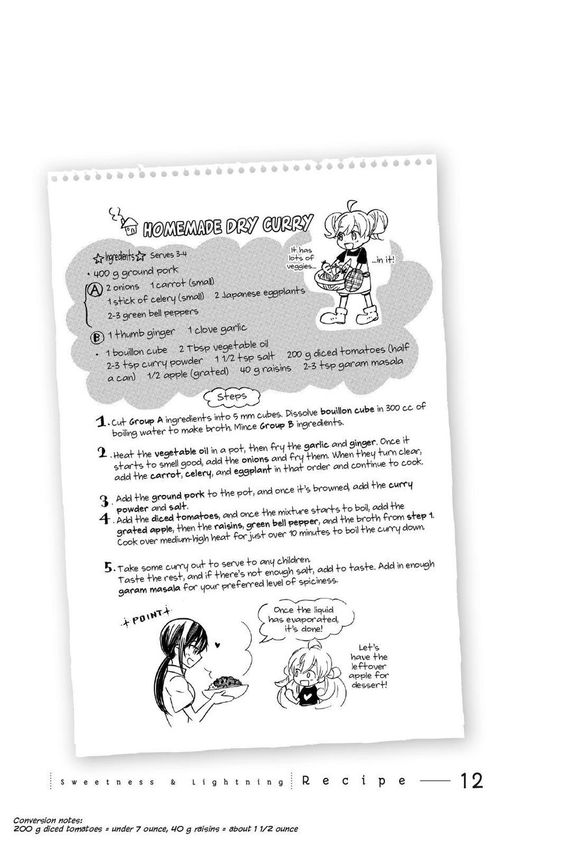 Unlike Shokugeki’s Michelin-level cuisine of ridiculous ingredients, skill and preparation, Sweetness and Lightning gives us the type of food that we can make at home by ourselves, or even better, with family and friends. They’re fun and delightfully easy to follow, and I learned so much about the basics of cooking from this manga. I still love making the omurice recipe I posted on this blog months ago, and I highly recommend you check that post out for a fun breakfast idea.

It’s obvious from what I’ve typed out that I love this manga to bits, so without further ado, let’s dig into the wholesomeness of Sweetness and Lightning.

Since the death of his wife, Kouhei Inuzuka has been caring for his young daughter Tsumugi to the best of his abilities. However, with his lack of culinary knowledge and his busy job as a teacher, he is left relying on ready-made meals from convenience stores to feed the little girl. Frustrated at his own incapability to provide a fresh, nutritious meal for his daughter, Kouhei takes up an offer from his student, Kotori Iida, to come have dinner at her family’s restaurant. But on their very first visit, the father and daughter discover that the restaurant is often closed due to Kotori’s mother being away for work and that Kotori often eats alone. After much pleading from his pupil, Kouhei decides to continue to go to the restaurant with Tsumugi to cook and share delicious homemade food with Kotori.

The formula for each chapter is rather simple:

Formulaic as the chapters may seem, the actual content is very well written and engaging for a slice of life manga. I care a lot about each and every character, and the different personalities of each of them give us a small but fun ensemble cast of characters.

The relationship of the three main characters, Kohei, Tsumugi and Kotori, is legitimately one of the best relationships I have seen in a manga. Despite the huge differences in their age, they all come to love and understand each other completely through their cooking. 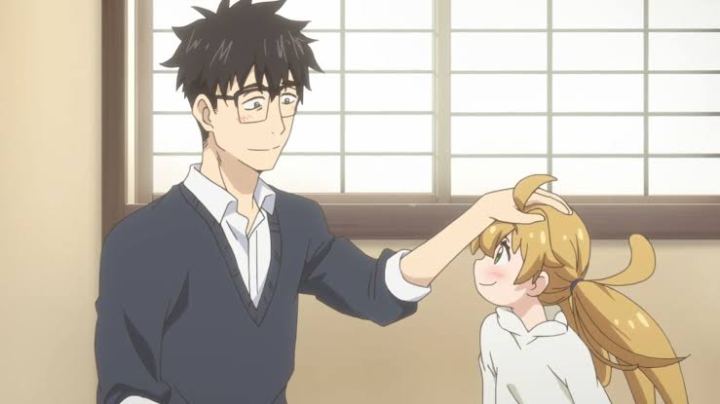 Kohei is a single parent who is still recovering from the death of his wife. A very caring man, he knows he lacks that motherly touch that he wants Tsumugi to have in her life. Despite not completely understanding Tsumugi sometimes, he is always giving his all to make sure that she is safe and happy.

Surprisingly, he doesn’t actually baby Tsumugi at all. He never really spoils her even when she throws a tantrum, and is firm and strict when the situation calls for him to be. Another thing I like about him is his honesty with his child, never treating her like she’s stupid. For example, one of my favorite exchanges in the manga is when Tsumugi asks him a very serious question: 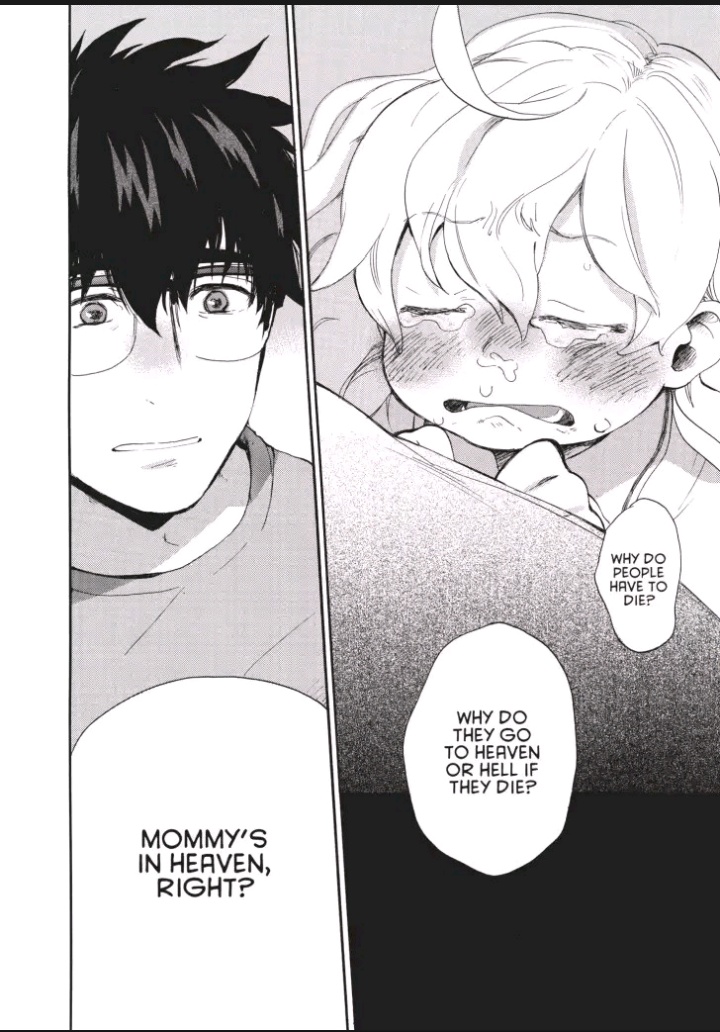 Obviously, Tsumugi ends up asking if he thinks her mom is in heaven, and he responds:

I was incredibly surprised by his honesty. He didn’t claim to be an all-knowing guardian, he only said what he thought. From what I’ve seen in the short 19 years I’ve lived on this planet, a lot of parents make the mistake of making themselves seem infallible in their children’s eyes. I think a huge reason why kids suddenly rebel is when they realize that their parents make mistakes like anybody else, and they lash out at being “betrayed”. However, despite his own beliefs, he chose to give her daughter the benefit of hope. He may not know for sure to himself if his wife is still out there, but he’ll be damned if he’ll make her daughter lose her mom all over again. 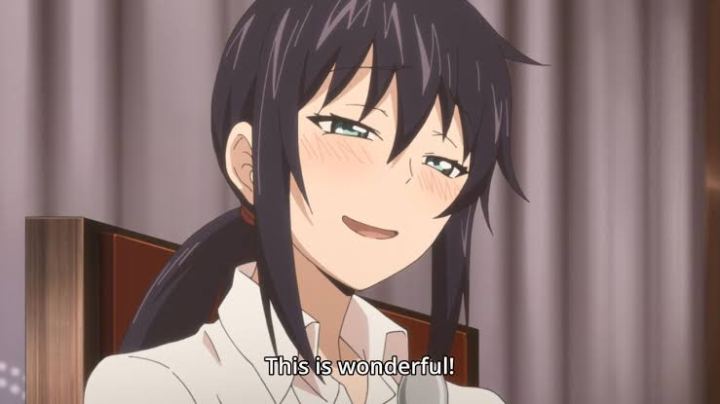 Moving on to Kotori, she is a seemingly meek high school student who Kohei and Tsumugi find crying alone by herself. Kotori is a very emotional girl, as befitting a teenager who doesn’t yet know much about the world, but is mature enough to understand that fact. Her character arc is basically centered around her coming of age as the story progresses, by having her confront what she wants to do in the future and what her feelings are for Kohei and Tsumugi. 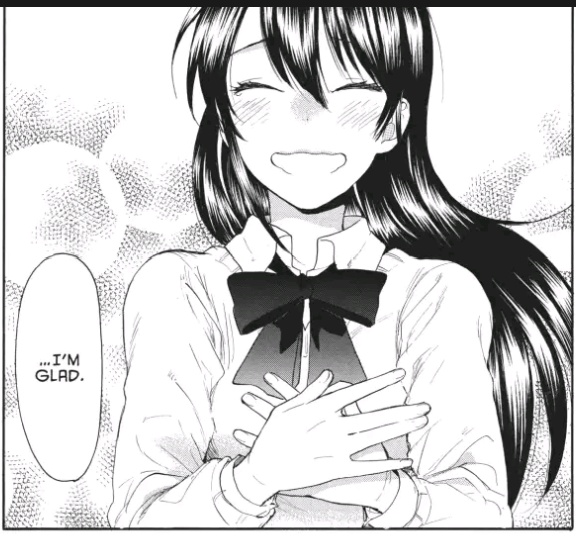 Her arc is VERY important and a central focus in the later chapters, so I don’t want to spoil too much about her. Just know that it’s a very believable conflict and I loved how the author handled all the questions you as a reader were thinking about the nature of her relationship with Kohei. 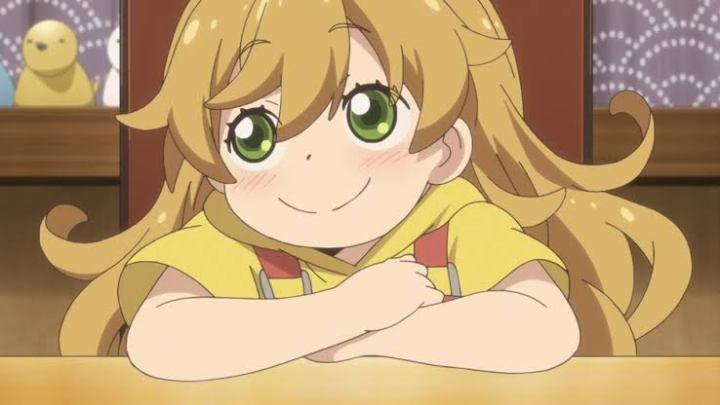 Lastly, Tsumugi. She’s adorable, energetic, and most importantly, can be really annoying sometimes, because come on Japan, KIDS ARE ANNOYING SOMETIMES! 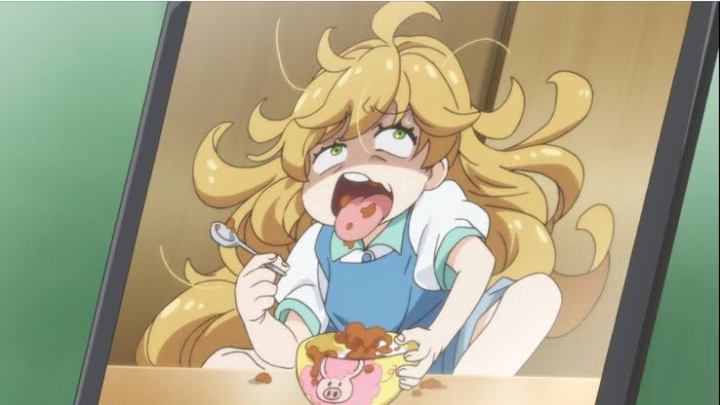 I love Tsumugi because she is one of the few child characters in anime who actually acts like most children would. She throws tantrums when things don’t go her way, she does things impulsively wether or not she has good intentions, and she’s temperamental when she thinks she gets berated for something she doesn’t understand. Despite all that, she is quick to apologize when she realizes her own mistakes, and is generally just a bundle of fun 85% of the time.

In a sea of lolis and overdeveloped 12 year olds, Tsumugi stands as a beacon of wholesomeness and fluff.

I loved this series and the ending was appropriately open but also satisfying. It got me into cooking, it got me into manga, and now, it got me into post-series depression. The recipes are all relatively simple, in-depth and easy to follow all bound by a story that is heartwarming and engaging . I will miss this series dearly.

That’s all for today, so until the next time we meet: