[Repost, some very bad things happened to my personal life I need to handle first. Wish me good luck, guys :(]

Imagine yourself in a quiet riverside, with snow falling down like rain and winds of biting cold. You are warming your hands by a huge campfire, all alone in the cold, and yet you’re snug and comfortable. Despite being surrounded by harsh and unforgiving cold on all sides, one of the most comforting images one can imagine is just this, a warm campfire in the middle of a harsh winter. This was the mental image that popped into my head while watching this show, and you will soon understand why.

March Comes Lion is about 17-year old professional shogi player and high school student Rei Kiriyama. He has just moved to a new city, with minimal belongings, and a huge apartment all to himself by the riverside. 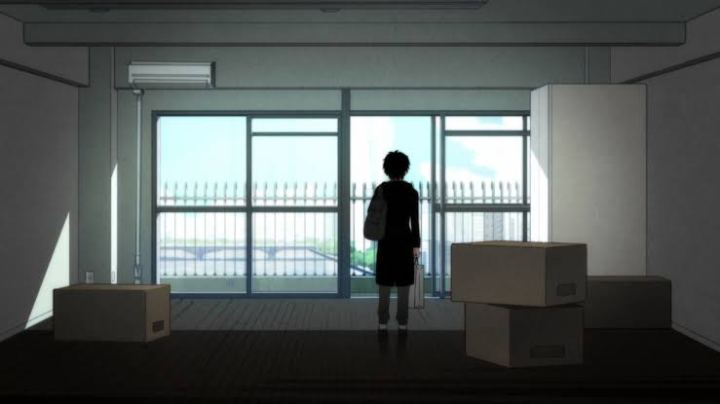 Despite this independence, Rei Kiriyama is chronically depressed, horribly malnourished, and incredibly lonely. He left home to repay his debt to his adopted family, a debt he believes he can never repay, a guilt that is easily and almost always manipulated by his beautiful but harsh stepsister, Kyouko. He has a mysterious, intimate, and yet distant past with her, one she nevers lets him forget.

One night, he collapses in the cold and is found by a kindhearted woman, who takes care of him until the morning. This woman is Akari Kawamoto, the eldest sister of the Kawamoto family. He doesn’t know it yet, but the Kawamoto family ended up being the biggest bundle of kindle that sparks the fire in Rei’s frozen life.

Throughout the story, Kiriyama will meet a a lot of characters, some who will put more kindle into the fire of his heart, and some others who act as more hailstones in the blizzard of his life. It’s a story about the eternal struggle between happiness and sadness. A moment of sadness can suddenly be lifted by a joyful event, and vice versa. It’s a balancing act for all the characters.

The Kawamotos, for example, are a family with strong bonds, a warm house and have the treasure of being some of the most kind and compassionate people you’ll ever meet. At the same time, they are fighting off poverty and have been orphaned at an early age, leaving the eldest sister and the grandfather to shoulder the responsibilities that a mother and a father should have.

Kiriyama himself is also an example of this, though unfortunately, the scales are heavily tipped towards sadness. A childhood with no friends, and some may argue, no real family. Rei uses shogi as an escape from the reality of his sad existence. Hell, even shogi, the only thing he believes he was truly good at, is the cause of his step siblings’ jealousy and anger towards him, and what drove his foster family apart. Only when he meets the loud and brash Nikaidou, his self-proclaimed sickly but energetic rival, and the Kawamoto family does he even start showing hints of emotions other than sadness and numbness.

The next two arcs are about two very different professional shogi players, and yet they are a huge part in Kiriyama’s growth,and encapsulate the hot and cold that the series likes to balance.

The cold and harsh Gotou, a man who Kiriyama believes is hurting her sister. We are first introduced to him beating up Kiriyama after he confronts her with accusations of cheating on his comatose wife with Kyouko. However, as the series plods along, we realize that Gotou’s situation might not be as cut and dry as Kiriyama believes. He may be cold towards people and their feelings, but he respects those he believes are worthy of respect. He helps along players weaker than him if he believes them to be worth helping, such as with Mr. Smith, and he judges people by how they act towards him, not with a preconceived notion he has in his head. This is something his age has taught him, and what Kiriyama lacks, as evidenced by his judgement of the other influential shogi player in his life, the meek-looking Shimada.

Shimada was first introduced to us by Kiriyama as a “boring” player who only cares about rank by drawing games out. In Kiriyama’s single-minded haste for revenge against Gotou, he doesn’t even think that Shimada is worth his time. Shimada proves him very wrong, as he completely and utterly defeats him. It is then revealed to us that Shimada is a tenacious and stubborn fighter,a nd that despite being weakly and soft-spoken, he embodies the fiery passion and determination that a shogi player must possess. This is in contrast with Gotou’s cold reading of his opponents and his methodical but unflinching style.

It is incredible to me how masterfully this series can show us the themes without even outright telling us, through the actions and personalities of the characters alone.

The animation and visuals are a perfect reflection of the show’s identity. For example, whenever we are in a place like Rei’s apartment, it is framed in a drab and almost suffocatingly blue atmosphere, with little to no music, almost as if staying there is drowning Kiriyama in his own thoughts and emotions. It looks and feels realistic as well, to further drive home the point that this is Kiriyama’s real life. 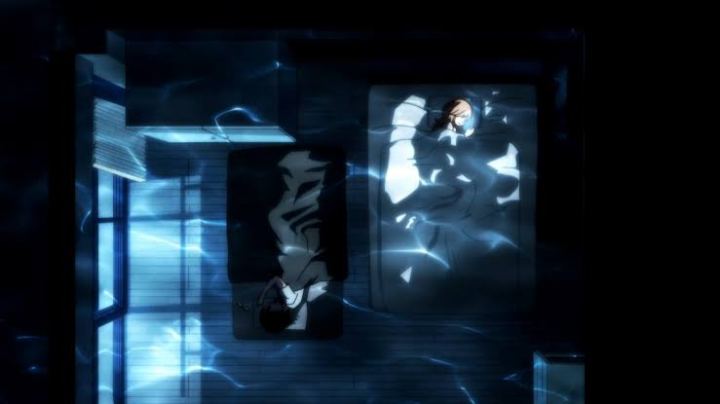 In contrast, when we are in the Kawamoto household, it is fluffy and bright! There are a lot of flashy effects on the screen, soft and happy melodies in the background, as well as a dreamlike gold sheen to everything in frame. This represents how Kiriyama sees the house as well as its inhabitants. To him, it is almost like a dream come true, hence the dreaminess of the setpiece.

The animation, as usual of Shaft, is breathtakingly odd and beautiful. 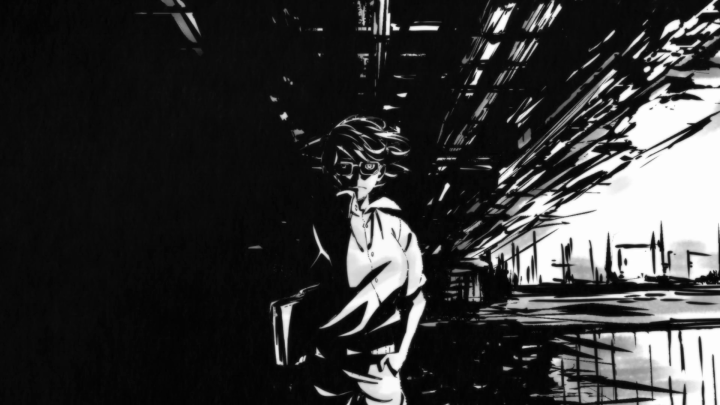 My favorite times are when Kiriyama is going through rough emotions, the style is suddenly rough lines, and almost violently sketchy animation.

I’m not gonna talk anymore about the beautiful animation, because I’m just gonna show it and let it speak for itself. These are the two openings for the show, and it is rife with the symbolism that I just talked about. Click on the images to watch the openings yourself on YouTube!

3-gatsu no Lion is an incredibly moving story with breathtaking animation, deep characters, and an honest message about the happiness and sadness that one must always go through in life, and how important it is to have people you can rely on to be there with you for every step of the way. Going back to my metaphor of the campfire and the cold, the core theme that 3-gatsu wants to ingrain in us is that we must work hard to maintain our own happiness. The blizzard is a force of nature, we cannot know when it will calm down, or grow even stronger. What we can control, is our own fire of happiness.

The blizzard of life is uncaring of your plight, and we must work hard to kindle our fire with the people we care about and the memories we make with them. Kiriyama took a long time to finally get his campfire going, and he has no intentions of ever letting it snuff out. Sadness in life will come and go, but we can always create happiness. All you need is a little kindle.

That was my review of the first season of 3-gatsu no Lion. I hope to post my full review of the second season by next week. Comment down below your own thoughts on the series, or even throw out some moments or characters that you want me to talk about with you!

8 thoughts on “A Warm Light in the Cold Darkness: Sangatsu no Lion S1 Review”