Contrary to popular belief, a lot of yuri stories exist for reasons other than fan service. While a lot of them are portrayed as bubbly and sweet, quite a few, either through a misunderstanding of the orientation or just plain smut writing, are played up as “forbidden fruit.” Writing a realistic same sex relationship is certainly difficult if the writers themselves are straight as a ruler, but some writers do better than others.

However, something I do wish would pop up more is the portrayal of unhealthy relationships without any romanticization, as it provides us with some unique character dynamics, as it is a very intimate conflict. This has existed with straight couples obviously, but not so much for the opposite.

Recently, I got to watch two very different portrayals of a lesbian relationship, and it is certainly not a pretty portrayal. The “couples” in Citrus and Scum’s Wish I will be talking about are dysfunctional in their own way, but I personally believe one trumps the other overall.

Spoilers ahead for both series. I will only be talking about the portrayal of the characters in the anime adaptation. I also won’t be getting too nitpicky with every single detail, only focusing on the major themes and moments.

The biggest difference between Citrus and Scum’s Wish has to be how the relationship starts for the girls in their respective shows.

In Scum’s Wish, Sanae starts to develop feelings for Hanabi becase she saved her from being molested on a train. Since then, they became best friends and are always together, sharing their problems and insecurities, for better or for worse. This in itself is a good start. Sanae started developing feelings for Hanabi out of gratitude from saving her from being molested. We immediately understand why Sanae and Hanabi would develop a close relationship from the get-go, as it did come from a place of genuine gratitude and admiration for the other, not just lust.

The first meeting between Yuzu and Mei, on the other hand, literally starts with sexual harassment.

And ends on even more sexual harassment.

I’d say Scum’s Wish does the start of the relationship between two girls about a hundred times better than Citrus did here. I cannot fathom a universe where a sane person can start developing feelings for another after being literally used against their will. Some people are into it, sure, but we see no indication that Yuzu was into it, and her reaction was more shock than anything. She eventually accepts it, and we see further down the line why Mei is a serial molester. It’s still a very wrong start to the relationship. Instead of being founded on something genuine and admirable, it came from a place of force and base instinct, which some may argue is the point, I just don’t think the point came across very well because this is literally the first time they’ve met, and we are expected to cheer for them.

Despite this header, the sin does NOT refer to the fact that they are the same genders (mostly) . I really dislike the “forbidden fruit” way of telling a same-sex relationship with our modern sensibilities. I am glad they get over the “b-but we’re girls, this is wrong” parts of the story relatively quickly in both.

No, the sin here is the context of the relationship itself.

In Scum’s Wish, Sanae and Hanabi’s intimate relationship was started because Hanabi was unhappy in her current relationship, and so both mutually agree to start this relationship as a way to cope. It’s cheating on your boyfriend with your best friend, and everybody can agree that that this is pretty “sinful”. Even if we know that Hanabi’s relationship with her boyfriend isn’t that great either.  Hanabi’s reasons are because she wants to keep Sanae as a friend, and to numb the pain she feels form her actual relationship, while Sanae, fully aware of this, opts to manipulate Hanabi into sleeping wither her at her most vulnerable. 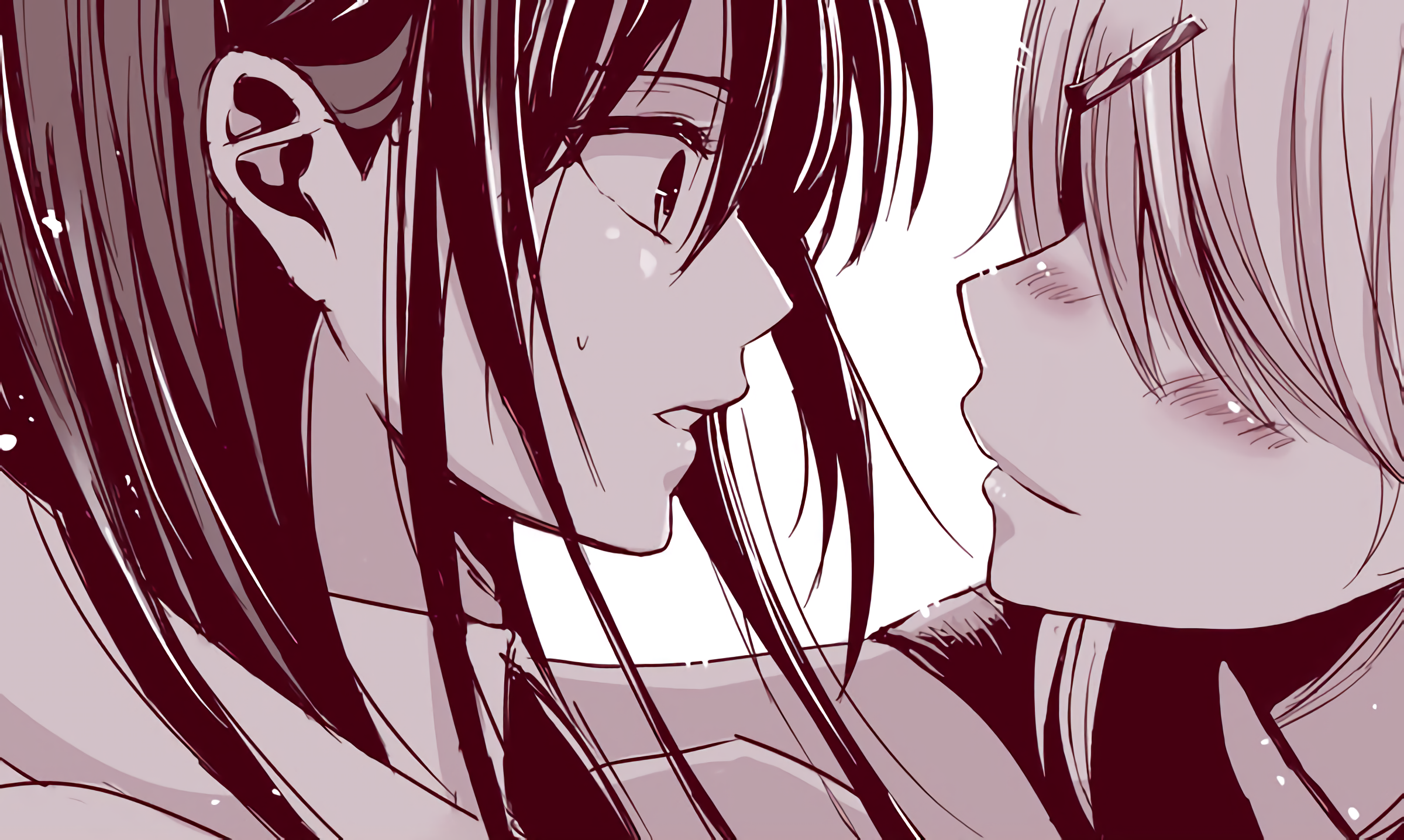 Yuzu and Mei’s relationship is sinful for a variety of reasons. First off, they are legally step-siblings, and while there is no blood, the taboo is in part just how society would view such a relationship. Having a dad and mom with children who are also in a relationship is strange, that’s for sure.

The second is because Mei was already betrothed to her teacher, and Yuzu’s just kinda there as a way for Mei to anchor herself to reality. I can respect the fact that Yuzu pushes Mei away whenever she tries to forcer herself onto Yuzu. She is perfectly aware that Mei is only doing so thanks to her screwed up sensibilities about love.

This is the basis for why it’s unhealthy. A theme for both couples here is the fact that they are in these relationships for very selfish reasons. Be it as a way to cope with their own confused feelings, or to hurt another person, it’s all for selfish reasons. Relationships can’t last if all it’s running on is spite and lust.

What I would like to bring attention to is just how differently the two couples are when things start getting intimate. Sanae and Hanabi’s first time together is mutual, but there is this palpable sense of unease between the two of them. Their body language, with the hands continually grasping and ungrasping, their eyes slightly looking away after kissing, and just the stiffness of the scene is telling of their true feelings about this situation. It’s cold comfort for the both of them.

This relationship is wrong. They fully understand that, and you can sense that even though they do like each other, you can tell both are being selfish, one way or another. Hanabi wants to keep Sanae as a friend. At the same time, she also wants to feel intimacy from another person other than his cold boyfriend. Meanwhile, Sanae wants Hanabi for herself. This was where they decided to meet on those issues, and it was a pretty bad idea.

Yuzu and Mei’s intimate scenes on the other hand are all emotional outbursts. Instead of the subdued sense of unease, most of the intimate scenes between them are adrenaline-filled and passionate, but is almost always followed by shock or regret.

Considering these are immature and hormone-charged teenagers that are always together, it makes sense that it happens. What doesn’t make sense to me is why Yuzu isn’t freaking the hell out more about how creepy Mei is. Yuzu is blaming herself and her confused feelings when it was Mei who forced herself on her. Imagine if Mei was a dude, you could bet that there would be so much more outrage about the forced kissing scenes, but since they’re girls, it’s “pure”, which I personally have a lot of issues with, but that’s for another topic entirely.

That aside though, Mei is almost mechanical in her affection for Yuzu. It’s more obligation than genuine, at least at first when she refuses to accept her feelings.

Overall, I think the yuri relationship in Scum’s Wish is something that is way more possible in real life than the one found in Citrus. I can chalk this up to writer’s inexperience. The writer and illustrator for Citrus’ main goal is to have yuri moments, with the plot just being there as kind of an excuse for these two to be together. It plays up a lot of melodrama to keep you invested while ignoring how a real life relationship like that would actually work out.

Hint: They would most likely hate each other, not start fawning over each other.

Citrus is definitely as sweet and sour as the fruit it got its name from.

Scum’s Wish is definitely not perfect, it has a lot of melodrama and a lot of over-the-top qualities to it as well. The awfulness of the characters as human beings can definitely be comical at times. However, I think their portrayal of Sanae and Hanabi’s relationship is one that’s more in line with reality, and in my opinion, done very well. The melodrama makes sense because this was how teenagers view the world. Everything is a big deal, everything is important, my relationships now will matter until I get older, etc. It’s much more realistic, and honestly just fleshed out way better than Citrus’ anime adaptation did.

And lastly, let’s talk about where the relationships ended in both anime.

In Scum’s Wish, Sanae tries to break it off after realizing how badly she could end up hurting Hanabi and herself, but in the end, friendship wins, and both mutually agree that they should just stay as what they always were: friends.

I like it because it was the most reasonable outcome for this situation, and strangely enough, the most adult way that it could have been handled by teenagers. They admit their feelings, and also admit that what they’re doing won’t end anywhere good, so they mutually agree to end it on as best terms as possible. I can respect that, even though more than likely they’ll be awkward around each other for months to come.

Thankfully, Citrus does get a lot less rapey. In fact, the ending is actually pretty sweet and comical, mostly thanks to Yuzu being all flustered by hand-holding out of all things.

Their final kiss is also surprisingly wholesome and dare I say it, actually romantic?

It’s Mei finally accepting she was in the wrong, and Yuzu determinately (and possibly quite stupidly) answering to her advances with compassion. That doesn’t make up for the god-awful start to this this series, but it is a start for something much better than what we had.

Overall though, I think the bittersweet conclusion to Scum’s Wish was better handled, as well as the relationship as a whole. It was just a lot more focused on struggle and inner conflict instead of just cute girls kissing.

I hope that starts a trend on yuri shows with more depth to them than “scandalous” or “pure.” I hope for the day a same-sex relationship is portrayed in an anime in the vein of Tsuki ga Kirei.

What are you thoughts on this, and yuri anime in general? Let me know in the comments below, and once again, thanks for reading!

P.S. I am totally straight, it’s not my fault these girls are cute!