Because this is apparently the season of strong starts, we have Overlord and Cells at Work going overtime on great starter episodes, made doubly ridiculous by the fact that both sound super mundane on paper.

The way these two seemingly mundane concepts take fruit is just fun, and I’m excited to talk about them, starting with:

Ah, what better way to start off this action-adventure fantasy dark comedy than with our glorious Ainz-sama taking a slime bath! This episode is literally just the denizens of Nazaricke taking a load off after Ainz sama tells them to, because otherwise, they wouldn’t stop working out of pure loyalty. We get to see a little something new from just about everybody, and it’s a really fun way to see how most of the guardians interact with each other off the clock.

I’m frankly not surprised Albedo is technically a pure maiden. Her love is only for Ainz-sama. The purity of that love, well………….

You know, it’s weird how much I like these irrefutably evil monsters, because it really is just one big, happy, torturing, forced interspecies-breeding, mass genocide commiting family. It’s like if we saw someone like Hitler petting a dog, you can’t help but think “Man, what a good dude for petting that dog!”

Seeing Ainz-sama practicing in front of a mirror to be cool, then pomfing on the bed like a salaryman is wonderful. Especially with the next scene be about the NPCs praising him for sitting so cool and that somehow leading up to a heartfelt speech about how much he cares for all of them is just funny. I think they portray the idea of unwavering worship here incredibly well.

Also, Albedo is thirstier than a lost man in a desert in this scene. Leave it to Albedo to get turned on by a rousing and wholesome speech from our glorious Ainz-sama.

And of course, the sauna in the last minute provides us with a rather, um, fortunate detail for you would-be doujinshj artists. By the way, new OP is STRONG!

I absolutely love Myth & Roid, I actually liked the ED for S2 of this show more than the OP because they sung it. I haven’t listened to it enough to judge it compared to Clattanoia (the first OP), but I think this might actually be better.

Overall, a really fun episode before shit hits the fan! We’ll probably get our blood and guts next week after this wholesomeness, so stay tuned.

While we’re talking about blood and guts, though- 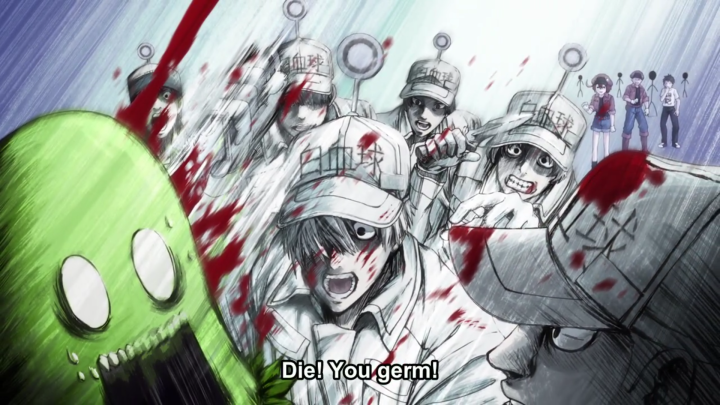 I’m not joking, I swear!

The cast is adorably striking, the designs of the viruses are kid-friendly and reminiscent of DBZ, and it’s got that whole teaching kids about the wonders of the human body in an awesome way, such as having your sneezes be bacteria monsters being ejected from your body via missiles. Sure it IS a bit more tell than show, but I think they show enough of the actions of each type of cell introduced that I honestly don’t mind.

Did I mention they were adorable?

The beginning plot is very basic, but what do you expect from a kid’s show. Why do I keep calling this a kids show? Because of the fact that it airs at like 8 a.m. in Japan according to my sources, so you know most kids are gonna be tuning in on this. I don’t really mind a basic premise for a comedy anime, as long as it pulls off the comedy well, which it does in spades. I was laughing for quite a bit of it, and was smiling the whole way through. The jokes are fun, the visual comedy even greater! Lots of cliches in there, sure (T Cells of cocky elite guys, hapless and ditzy MC, hypercompetent friend in White Blood Cell), but tropes exist for a reason, and that’s because people like them. 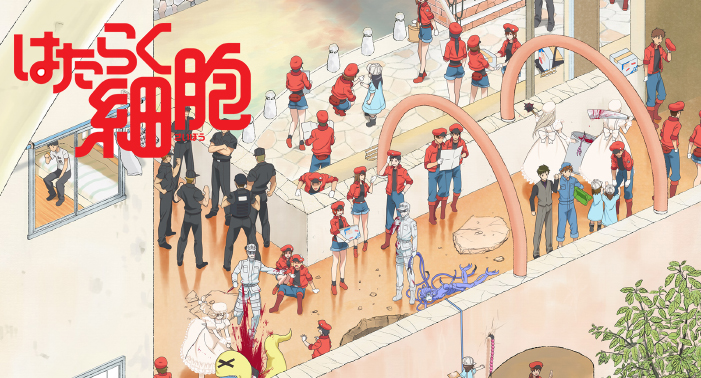 An aspect I love about the show is that when it pans out, everything is so busy. David Production impresses me by how well they managed to portray the human body as a living, breathing world (which to be fair, it is anyway). All the cells are just cogs and gears helping this organic machine run smooth. I love how brutal the show is with violence, but having the reactions of the viruses be cartoony as hell. This may not be a show that will get the critics jottling down character essays about it (hint: me) but I now have a show I can watch with my siblings every week besides My Hero Academia.

Also, the action here is surprisingly high quality, as expected of David Productions! 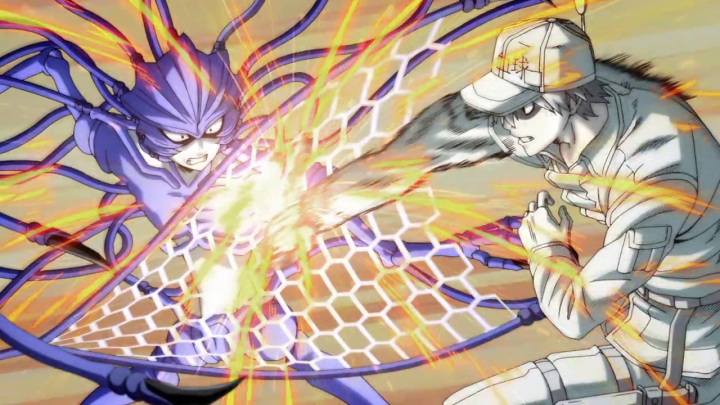 I hope they get names, though. I know there are like a gajillion of them, but some identifier for them besides a number would be great.

I’m excited to see the rest of this, and I’m wondering if we’ll ever see whose body it is exactly were inhabiting. I hope it’s not Bill Murray.

That’s all for today, and while I think I’ve found my top 3 shows this season with Hanebado, Overlord and Hataraku Saibou, the seasons is fresh and ripe for improvement. One thing’s for sure, this season has had great start.