Hey guys, it’s that time of the week again, the time for me to recap the three shows that matter this season!

I’m kidding, I’m sure there are a lot of wonderful and amazing shows out there right now despite the fact that I have no intention of watching them anytime soon thanks to my Satoshi Kon and Makoto Shinkai binge.

Well, without further ado, here’s the quick reviews of stuff I saw this week.

Narumi looks stunning in her date wear. She really goes the extra mile for this little date with Hirotaka, who as always is wearing the stuff he usually wears. A rule is also set: No otaku stuff. Anytime you bring out your degenerate otaku side, slip in 500 yen into this piggy bank. I would probably be broke about five minutes into a date like this.

They go through some fun rides, lose a bit more yen to the piggy god and a mixup of couples in the horror tunnel with the Kabakura and Hana-chan. See photos below for the difference in fucks given for each pair! 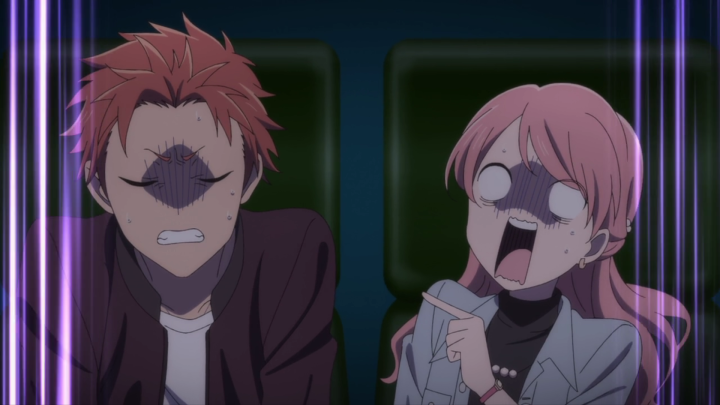 Hirotaka then thinks to himself how much Narumi and himself are adjusting to each other, and wonders wether or not he even deserves her, or if this was a mistake. Does he still want to continue this relationship? They sit down in silence for a few minutes, and Narumi decides to answer it for him.

And so ends Wotakoi. It was a good run, but all good things must come to an end sooner or later. As Wotakoi has taught us before, communication is important, and that extends to ending things on a good note.

It was a good run, but I’m still depressed at the abrupt ending of such an adorable and surprisingly adult relationship. I’ll miss the fluff. Goodbye, Hiro and Narumi!

Today’s episode is setting up for probably the HYPEST fight in the entire manga. It’s going to be insane, as All for One and One for All go head to head, as the two strongest superhumans duke it out. First, let’s break down why the first six minutes was just a-

Yes, we got baited! I ain’t even mad, Hirotaka was also being paranoid, it’s his fault I got paranoid too.

But you ain’t doing that again, Wotakoi, I’m a smart boy, you can’t-

So, as I was saying about My Hero Academia, we finally get a good look at the mysterious All for One. Despite the rather annoying SIX minutes of recap, the rest of the episode was pure quality. I honestly don’t even want to spoil anything, because this is a fight that I will be making a LONG analysis about it once it is finished, because I’ve already read it in the manga, and it is legitimately the best shounen battle I have seen since Naruto and Sasuke’s final battle. It’s that amazing, you all have to just wait for it. Instead, I’ll talk about the other focus, which is Deku’s rescue plan for Bakugo. I am glad that Deku actually takes into account Bakugo’s pride when rescuing him, and lends the role of rescuer to the closest thing Bakugo had to a best friend, Kirishima!

The doujins are writing themselves even harder than before!

Plus, Toga proves that my attraction to her is simply something I cannot control.

Great action-packed episode, and I kept on rewinding that sakuga part of Bakugo flying up to Kirishima so many times just to appreciate the poor animators who made that shot look amazing as it did.

In this episode, Hitomi proves that she is doomed to always succeed at literally everything she does, despite her own thoughts to the contrary. The girl just cannot say no, and it’s a weird sort of inversion of schadenfreude, where instead of getting satisfaction from her failures, I get an immensely sick satisfaction from watching her grow more and more successful. Not to mention all the child labor laws she must be breaking. I fully expect Hitomi to be the Empress of Japan by the end of this season’s run, through the power of irresponsible adults.

Now that that’s out of the way, let’s talk about Anzu! She finally earns her first paycheck, and immediately does not know what to do with it. Whenever Hitomi shows her something that she might want, she simply responds in the most frugal way possible, thanks to her hobo upbringing. Why buy Starbucks when I can just drink water from the park water fountain? I really appreciate that the show goes out if its way to remind you that Anzu’s actions are all a result of the lessons she’s learned as a homeless person, irregardless of where she is in life.

The fact that she’s so excited about having ¥5,000 and not about what she can actually buy with says so much about how she’s developed a s a character. I’m glad she didn’t end up being an annoying rival character. Moving on, Anzu decides to get something for her foster parents as thanks, because Anzu wants to kill me with sheer kindness. However, she unfortunately gets suckered into gambling it all away by Sabu, AKA the dude who almost got Nitta thrown into the bottom of the ocean. I was so scared that she would try to cheat using her powers, but I immediately slapped myself for even thinking she would try doing that. It was a great jump from when she used to simply steal whatever she wanted from people. In the end, she just decides to give them “massage coupons” courtesy of her, a very humble and simple gift that means a lot more than anything she could have just bought.

Great wholesome episode about two girls who just can’t stop being perfect in their own way.

That’s about it for this week, and see y’all next week!