My Hero Academia pays homage to all the different flavors of edge in media and pop culture, from the stoic badasses of manga, to the dark and brutal comic book heroes of the 90s, to the rash and loud shounen protagonists of the early 2000s, there are plenty of things to talk about. In this context, edge is what I use to refer to what the younger generation of nerds used to think was” cool”. You know, the kid who would run around with Akaktsuki robes and adjust his glasses like an anime character, that goth kid who only talked about dark and depressing stuff and was only into horror movies, or that bully who ironically took every lesson from Naruto about bravery and courage, but not the parts about being kind to others.

So ready your band-aids, because we’re about to cut ourselves on some hardcore E D G E.

My Hero Academia is a cavalcade of character archetypes. So, it was only obvious we would get an edgy hero who has a literal “dark power” within him that he struggles to control. Tokoyami is just as brooding and mysterious as he looks, with every sentence he utters being 100% serious and with gravitas.

His design is simple, but striking. He has a the head of a dark bird, probably a black eagle or hawk, which gives him the sharp aesthetic that most edgy characters tend to have. He also has the old standby of a long and flowing dark purple cape. A dark-colored flying animal motif, the dark color scheme, and the cape should probably already ring all the bells of a certain Gotham-based superhero. 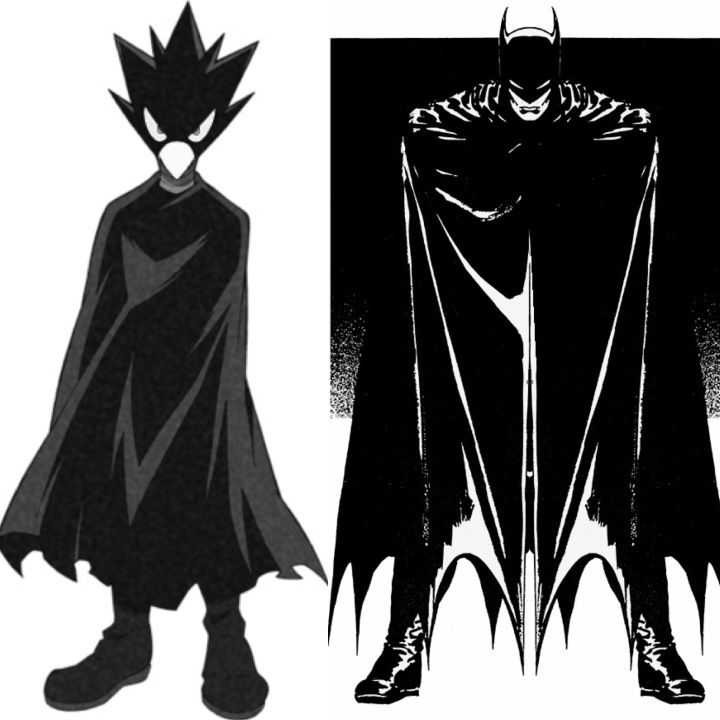 Another interesting thing of note is his name, Fumikage Tokoyami, has a lot of dark themes attached to it as well. First of all, Tokoyami already directly translates to “Eternal Darkness”, and his first name, Fumikage, contains the character for the word “shadow.” With all that in mind, his hero name is Tsukuyomi, the god of the moon, because the moon is around at night. I would argue that his power being a sentient and invulnerable ghost attached to its owner with insane speed and strength makes Dark Shadow a stand from Jojo’s Bizarre Adventure, another shounen classic with a stoic edgelord protagonist in Jotaro Kujo and his stand, Star Platinum.

At the end of the day though, Tokoyami is much more subdued than you would expect. Sure, he talk about darkness with as much gravitas as an Edgar Allen Poe poem, but he’s an otherwise friendly and stoic 15-year old. He’s a pretty fun homage to the gloom and doom characters that every high schooler would sketch on a notebook during class back in the day, while still retaining his own unique personality and identity. However, one thing he lacks that most edgy characters like him have in anime is one thing; being a huge asshole. 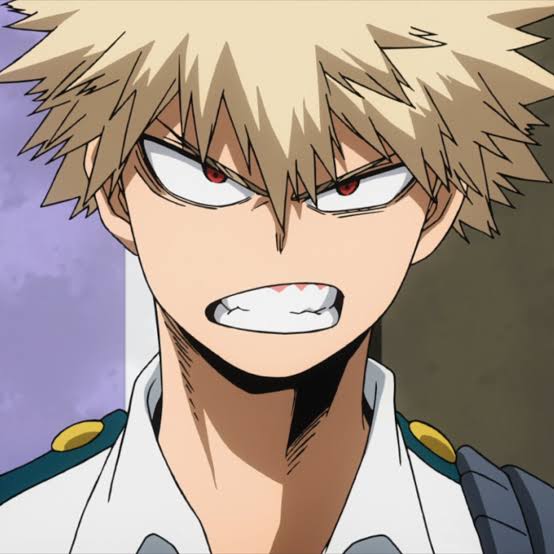 Ah, speak of the devil.

Bakugo is the other end of the spectrum of edgelords. He is, in a way, the combination of the shounen protagonists and their rival. He’s just as loud, uncouth, and brash as Naruto , but he also possesses the cunning and natural talent of Sasuke. If Naruto was born with natural talent and inteliigence like Sasuke, and instead of being an outcast, was praised and admired instead.

He’s arrogant, but he has the skill and power to back it up. He’s basically every neighbordhood bully’s idol, because he is smart and strong, and he didn’t take crap from anybody. His name, Bakugo Katsuki, in an amazing writeup by Kansai Chick on her own Japanese Kanji blog, is that his first name Katsuki has the symbols for “Win” and “Myself”, leaning hard into Bakugo’s drive and ambition. Bakugo also literally means “Explosion Master” which has nothing to do with this analysis, I just thought that was hilariously on the nose.

As a homage to the shounen leads of old, Bakugo has spiky and unruly hair like Naruto, Ichigo and Goku. Also like those three, he even manages to incorporate the colors black and orange into his design, to further drive the point home that “YES, I AM SHOUNEN PROTAGONIST!” It’s as flashy as his quirk, and the fact that he even names his attacks is also a strong indicator of this.

Which is what makes it doubly ironic that he ISN’T the shounen protagonist here. He’s the mirror of what a shounen protagonist raised with only praise and admiration would end up like, not the usual humbling and hectic childhood of your usual shounen protagonist. While Bakugo is certainly not evil, he is a person who values strength above all, and constantly challenges people to know their place. It’s as if Bakugo got all the talent and look of the protagonist, but it was Deku instead who got the kind and gutsy underdog tropes. He’s a very interesting character because of this, and I can’t wait to see what more they do with him in the anime.

Now, Bakugo may be an asshole, but he’s no villain. Now, let’s get ready to perch on some rooftops, because we’re gonna talk about the king of edge himself-

Stain is the most western-inspired design out of all of the characters we’ve talked about yet. He is a very, VERY clear homage to the 90s Anti-Hero of western comic books. His design is directly inspired by artists such as Rob Liefeld and Frank Miller, both artists and writers who ushered in the age of dark and gr in comics, but more on his design later.

His ideals as well are very reminiscent of ideals of the dark comics back then. He was once a paragon for good, until he gets jaded by all the crime and hypocrisy he sees, eventually turning to more and more brutal methods, and finally going over to the dark side and killing other heroes he deems unworthy. The cycle of a paragon going renegade is so 90s it hurts, since it basically follows the same basic progression of old comicbook storylines such as The Dark Knight Returns and Watchmen. Another cool little thing is that other people in-universe think Stain has a charisma to him, something that his eventual cult following can only describe as “cool”. It’s a great allegory for people’s tastes in comics back then changing from the pure paragons of justice to the dark and gritty anti-hero with flaws. 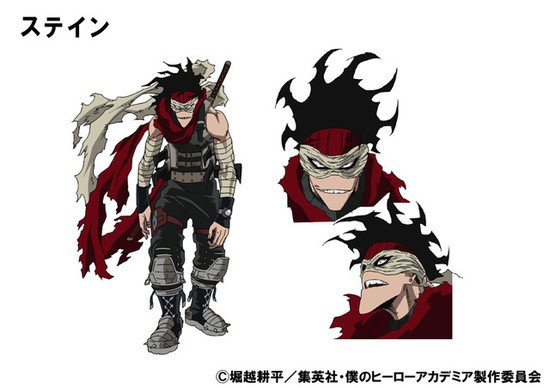 Stain’s design is the king of overdoing it. His clothes are dark and raggedy, he has belts and straps that could rival a Final Fantasy character, and of course, the bandages. As with all edgelord designs, he has a sharp aesthetic, from his the ends of his hair, the torn cape and scarf, even his chin is sharp and pointy. His name as well is another callback to the simple dark hero names such as Deadpool, Bloodshot,Deathmate and Nightblade. Stain is a name that evokes blood and violence, but, unlike the comicbook names, manages to remain a bit less campy. His manga design actually takes this to its logical conclusion, with even more knives and straps attached to him, as well as even darker shading.

It borders on parody, and yet his character is taken seriously in a way that isn’t stupid or ridiculous. He has a point (heh), but he’s also insane. He’s both a homage and reconstruction of the archetype, in that he does have followers and he does raise a good point, but he is still a psychopath that has to be put down in a world where practical and dark heroes like Eraserhead exist. Eraserhead arguably has the same core design as Stain (long raggedy hair, eye covers, lanky physique,disabler quirk, scarf and bandages, etc.), but more down to earth and virtuous. Stain is both a love letter and warrant of arrest for the dark and edgy aesthetic, by highlighting everything that’s good and bad about it.

Horikoshi is a big fan of manga and comics, and after this analysis, it really shows. I have nothing but respect for all the work he does, and it’s amazing how much effort he puts into the design and backstory of every single one of his characters, even the tried-and-true edgelord tropes. I read the manga side-by-side with the anime, though now, I feel inclined to read even further than the anime, as my interest is at an all time high.

An author who loves manga and comics turns out to be great at writing and drawing manga inspired by comics. Who’da thunk it?