Good whatever-time-it-is-you’re-reading-this, I am The Luminous Mongoose, and it’s time for a monthly seasonal series review!

Gun Gale Alternative is a really fun series and made me interested in Sword Art Online again. I was only ever really a fan of the Aincrad arc myself, but I did enjoy GGO, so I’m glad we’re back in it again with a more interesting protagonist.

Again, it’s just amazing how this show managed to be timed so well with the popularity of Fortnite and PUBG, especially considering it was written way before they were big. That’s some foresight!

So, the episodes structurally are weird. The first episode chronologically takes place after the third episode. This isn’t all that weird though as video games do this kind of thing all the time. They start you off at the high action parts when the MC ready knows a bit of moves and shows it all off. We get to see that LLENN is speedy and small, but also that she isn’t nearly as confident as Kirito was when fighting, and that she was a complete newbie who just happened to have a talent for this game.

I do like Karen basically having a “Sakaki from Azumangah Daioh” complex, and if Sakaki ever played a game, she would most definitely decide to be someone who looked this cute.

The relationship between LLENN, Pito and M is weird. It’s not bad, but it feels like it works for the sake of the plot. LLENN being a PKer is also pretty funny, and them meeting because of that doubly so. Bloodlust unites us! 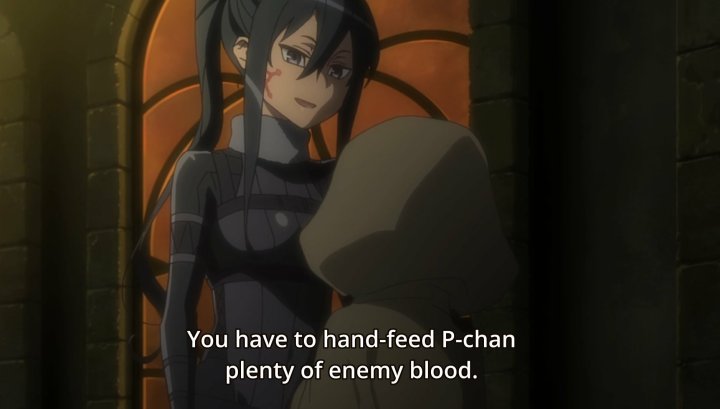 The first three episodes were pretty fun, but by the fourth, It was already dragging a bit. I also realized how low the stakes were since dying here was quite literally just a video game thing. It’s not even like a tournament thing or anything, so it’s even lower. All they lose is a shiny achievement.

Otherwise, pretty good so far, and with that ending, it at least has me interested in what the hell is up with M.

This being SAO though, I don’t expect anything too deep or well-thought out, but it oughta be fun.